It takes a lot of work to be cynical in a place like the Lake District.

With its quaint villages and spectacular views, it has inspired painters, poets, writers and all sorts of artists to capture its magic in their work since the 1700s. It’s the kind of place that would make a man like William Wordsworth stop his vocal support for the French Revolution to focus instead on daffodils and lonely clouds.

How can anyone be miserable when presented with this bucolic view? Even the village drunk looks friendly. In here, life seems fresh and simple, and there’s a sense that it’s always been this way. Returning from a walk in the fells, you can imagine asking someone where the parking lot is and the farmer would say, “Parking lot? But, dear lady, it’s October 1802.”

Why 1802? I don’t know…it just seems like the kind of year in which fairy tales can happen. Certainly, that’s what Coleridge thought when he wrote to the London Morning Post, informing the nation of the “romantic marriage” between a famous local beauty and a distinguished brother of an earl. It had all the elements of a once-in-a-lifetime love: a handsome aristocrat travelling in a remote town and falling for the pretty daughter of an innkeeper.

The local beauty was Mary Robinson (1778-1837), known to the nation as the Maid of Buttermere, the embodiment of unspoiled, natural beauty and guileless innocence that visitors of the Lake District sought. 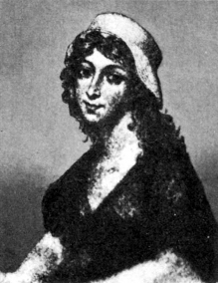 Mary Robinson
aka The Maid of Buttermere

Mary drew the country’s attention when she was mentioned by Captain Joseph Budworth in his 1792 book, “A Fortnight’s Ramble to the Lakes in Westmorland, Lancashire and Cumberland.” Suddenly, Mary became one of the “must-see” attractions of the Lake District.

People would go to the Fish Inn in Buttermere specifically to see her, and among the admirers she had to entertain were the Lake Poets. This must have produced some of the finest discussions in pub history:

Coleridge: “Mary, do you think maintaining a connection with nature will help to ensure the moral health of an individual?”

Mary: “I’ve no idea, luv. Now, I have a question for you–do you want your beef with a side of salad or chips?”

We don’t know if Mary wanted all this attention or not, but we do know that odes were written to her beauty and budding artists wanted to sketch her. It’s no wonder, then, that the Hon. Alexander Augustus Hope, MP of Linlithgow and the Earl of Hopetoun’s brother, took one look at Mary and decided he had to marry the exquisite commoner. They were married within three months, after a whirlwind romance that Coleridge described as a “novel for real life.”

It was a fairy tale, and it stirred peoples’ imagination. Unfortunately, it also stirred the outrage of Charles Hope, the Earl of Hopetoun, who wrote to the Morning Post saying that his brother, the real Hon. Alexander Hope, MP, was currently residing in Vienna and was not happy that some bloke’s been using his name. 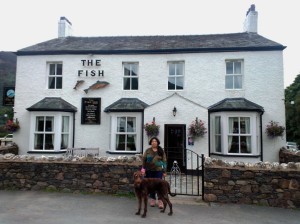 At the very least, this development would bring about some very awkward moments for Mary. How do you confront your husband of less than a year with these allegations? How do you even address him, since his name is clearly not Alexander? Who is this man you wake up with every morning?

It’s kinda hard to know when the right moment is to own up to a lie. Even if it’s just with friends you wanted to impress when you first met. When do you say, “By the way, guys, technically, I didn’t graduate from Harvard. It was a dick move, but at the time, I just thought it made me sound cool.”  Finding out that Mary’s husband was lying about his identity makes you wonder why he even married her in the first place. She wasn’t rich, and she drew too much attention.

His name was John Hatfield, and he’s made a career out of  smooth talking status-conscious men into lending him money, without any intention of paying them back. According to the Wanted notice that was printed in the papers, he was an impostor, a swindler and a felon.  Oh, he was also a bigamist. So the last thing he needed was a marriage to a darling of the press. 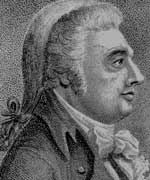 He was arrested in Keswick, but managed to flee to Chester until Bow Street Runners caught him somewhere near Swansea and brought him to stand trial in Carlisle. Both Wordsworth and Coleridge were there at the trial, where Hatfield was convicted and sentenced to die by public hanging on September 3, 1803.  He was demonized in the press as a corrupter of innocent maidens, and the trial was featured in national papers and Gentleman’s Magazine, and is mentioned in William Wordsworth’s The Prelude.

Maybe Hatfield and Mary really did love each other, we will never know. Life is never simple and straightforward, and idealized versions of it rarely provides substantial answers. What’s clear, though, is that when you marry into a fairy tale, then that’s all you’ll get.

Well, that… and a hard-earned lesson when reality comes back to bite.

A Library of Literary Interestingness

Two Teens in the Time of Austen

(Re)Connect with the Regency

Confessions of a Known Bonnet-Wearer

The Things That Catch My Eye